skip to main | skip to sidebar

So, have anyone gotten any physical copies of their Delving Deeper boxed set orders yet?

I got an email asking for shipping details, and thought that meant shipping was imminent. I waited.

Then I sent a question asking if it had shipped, and got the answer that apparently the person collating shipping information had messed up. I waited.

Then I send a question, asking it it had shipped. The reply said Monday, and promised tracking info. I waited.

Two Mondays later I asked again and got this answer

"Yes, your order did ship this week.  I will have your tracking number for
you later today."

Can someone please confirm that this is not turning into a total scam? With this post I might look like the fool, but I can live with that if I get some indication of what's going on.

Posted by AndreasDavour at 11:14

Does this look awesome or what? 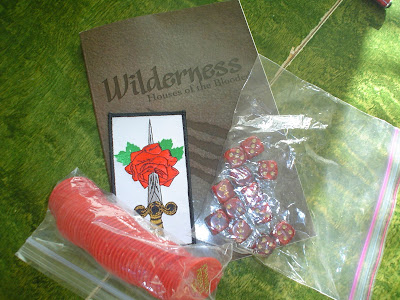 I have now contributed funding for two projects related to John Wick's Houses of the Blooded, and both have been great.

Wilderness suffered a bit because the person doing the layout was in an accident and while she would survive it was a clear setback to the project. Now, John is on top of things and could muster another do finalize things. The result is amazing.

Now when it's becoming clear that more and more projects don't deliver, I'm saying that John Wick and his associates will keep getting my money. He delivers. Thanks John, Jesse and everyone else involved!
Posted by AndreasDavour at 11:06

First off, let me just say I like criticals. The thrill of seeing the dice indicating that something wonderful/awful is going to happen is like no other. The drawback of course is to have to find those critical tables, rolling another die and all that which slow down the game. Maybe there is another way?

This fine post is one solution, where the damage is rolled off one small table and the game effects are narrated. Well, if you don't like those newfangled big words, made up on the spot.

Let's take that one step further in the player empower direction. If you do sand boxing, player initiative rules, right?

Let's assume you roll d20 to attack, and that low is good. Then, on a roll of 1, turn to the player that just rolled a critical success and ask them. "You just did something awesome. Let's hear what it was?" Likewise, when someone rolls a 20, ask them. "Now you have messed up. Let's hear how it went wrong." Players agency, right? As experience have shown that nobody is as brutal when describing a fumble as someone who inflict it on themselves.
Posted by AndreasDavour at 11:42

Free convention scenario for T&T
The Tomb of Dipsom Dints