skip to main | skip to sidebar

The value of battlemaps

At our last session of 7th Seas I learned something new about battlemaps.

Have you seen the floorplan in the back of the 7th Sea rules? It depicts a small tavern, with some tables, stools, benches and a bar. Also, there are some stairs, an oar up on a wall, a chandelier and a row of bottles on the walls. Nothing odd or special for a small seaside tavern, eh? No, but also a treasure chest of ideas for what to do when a brawl erupts in that locale.

The first thing my players said when I took it out and placed it in the middle of the table was "oh!" and "ah!". They at once started talking about how cool it would be to grab that oar and whack some bad guy with.

When the fight erupted they were primed for doing cool stuff. Naturally when a woman was treated badly, one proud Castilian declared the ruffian to be lowlife and scum before charging into combat. I guess I don't need to tell you how well this gelled with the mook fighting rules of 7th Seas? Grab the end of a table and turn it over in order to push a brute squad out the door again. Nothing breathes action like disposing of 5 opponents with one attack!

All in all it turned out to be a great fight, and a great gaming session. Not in any way was the battlemap used to plan where to be, or to count squares and distances. The only thing that made it work was the paraphernalia, the extra, the decorations. It was a stark contrast to the hastily drawn squares and corridors I used to make on the Chessex vinyl battlemap we used when playing D&D3.

Posted by AndreasDavour at 14:26

...and it's probably the most depressing thing I've read in a long time. I had to stop after the first part, and I think I need to wait for a while before managing any more.

Gloomy.
Posted by AndreasDavour at 21:44

Cataloguing my collection. Now, should I video blog?

Tonight I once again had my wonderful wife help me cataloguing my collection, by being my typist while I took down and read out titles. I'm now at 351 volumes, and counting.

While I'm doing this I can't help but blather on about trivia and memories of this or that game. Naturally, my wife is not that interested. Some she find kind of fun, but most of it she has told me she will never remember, or even bother trying. I don't blame her. But, she said that maybe somebody else might actually care. That someobody else could be you, reading this blog.

Would anyone reading this blog be interested in a video series, where I take down stuff off my shelves and sprout trivia and totally make a fool of myself for not pronouncing things right?

I'm not saying I will do it, but I'm wondering if anyone would be interested. I would be surprised, but I have been surprised by gamers before.
Posted by AndreasDavour at 22:57

When I started this project I felt like I wanted to get a grasp on how playing a psychic in the early days of the hobby would have been. Now I can say that it must have been a pain in the arse!

I don't know if it was lack of time, bad rules writing or bad rules editing, but believe me when I say that the psionic rules for OD&D is a mess. There are three different tables, depending on whom you engage in psionic combat with, and the rules for the psionic points are quite opaque. For example, Psionic Attack Strength is mentioned a few times, as is Total Psionic Strength. Oddly enough no definition is available for "defensive psionic capabilities", but a mention that they are the same as Attack Strength. So why on earth do you mention it!? Are the Attack Strength Points only used for Attack? Well, Total Psionic Strength is defined as twice the Attack Strength, which are then mentioned in the attack table. You are then very probable asking yourself why you double it up in the first place, or not call it something more intuitive?

Anyhow. I have started doing this as an exercise in gaming archaeology, and for my own enjoyment. Enjoying getting riled up about 35 year old rules is a bit, peculiar. Right? I'm probably just as nutty as those guys who wrote those crazy rules.

This have convinced my that I really need to write my own rules, without points, that feel like the rest of OD&D. I'll keep as much as possible of the old stuff, but do something with ability damage, AC and to hit numbers like regular combat uses. Wish me luck.
Posted by AndreasDavour at 17:26

Guess what? I'm getting more and more interested in doing my own take on psionics, whole cloth.

One thing I'm really sold on is ability damage. If somebody slaps you around with an Ego Whip, shouldn't your ego suffer? Do you feel wise no more punk, getting some Id Insinuation rammed down your psyche? It sure hurt my WIS.

This project grows.
Posted by AndreasDavour at 22:12

A Ziggurat under the sands

During the summer vacation I have had the opportunity to do some classic sand castle building. Guess what inspired this one? 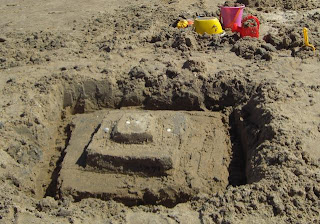 Let me give you one hint. Tom Moldvay.
Posted by AndreasDavour at 21:41

If you haven't had the opportunity to read the psionics rules in Eldritch Wizardry I can tell you they are very labour intensive. There are quite a few tables to roll on, and tables with modifiers for this and that. One table actually have the Death result. I bet it's because the head explodes.

So psionic combat. How do you make it work? This is what I'm thinking.

It would make sense to streamline things to use attack bonuses depending on mode, and have different modes being used to defend against different attacks. Also, it would make sense to have some sort of "mental" AC based on those defense modes. That way it would be just the good old roll a d20 and add modifiers against an AC. It would be far quicker than the fairly involved procedure in EW with points for this and that. I also like the idea of attacks targeting stats directly. In Traveller it works fine, so why not in a OD&D look a like?

It's a fine line to walk trying to clean up some old rules and making shit up whole cloth because it just makes more sense.

Quite fun little experiment this Eldritch Wizardry cloning attempt.
Posted by AndreasDavour at 22:30

You said what? Who? When?

I write like
David Foster Wallace
I Write Like by Mémoires, Mac journal software. Analyze your writing!
Posted by AndreasDavour at 13:09

What's the "feel" of psionics in fantasy gaming?

Being submerged in different versions of psionics rules lately have reminded me of my initial reaction when I read the Psionics book for D&D3.0 back in the day.

In that book they have a sidebar, or something like it, where they discuss the relation between magic and psionics. It basically boil downs to "it's just the same, with different looks" and they of course claim "game balance" it best preserved that way. Some days I wish all power gamers who out of envy bitch and moan about not having the same power as everyone else would all disappear to Mars or Jupiter.

I think psionics should be different from magic. Why would you have a character utilize both psychic powers and magic if they are all the same? Because they ran out of spell slots but have Power Points still? Please!


Or what do you think?
Posted by AndreasDavour at 22:52

Some oddities in Eldritch Wizardry

I have, like I have mentioned both here and elsewhere, started to take a serious stab at write some psionics rules inspired (or cloned) from Eldritch Wizardry.

I already know that my favourite way to do it is not the way it is done in EW. Way to fiddly and too much senseless calculations. I'm not sure I want to clone the mess, trying to make sense of it or just rewrite it my way inspired by the general concepts. But, I want to take a stab at "getting" it as it is.

Now I have a problem. I have been staring at that little booklet, with its very jumbled set of rules, for far too long. I can't seem to find any indication of when Basic and Superior powers are gained. Have I read that somewhere and right now stare straight at the text where it explains how they differ? If you can point me to where in the rules that is, please do!

Anyone good with the minutiae of the OGL?

I have the last few days been working somewhat on a clone of the psionics rules from Supplement III, Eldritch Wizardry, to OD&D. Part of me have wondered why this have not been cloned before. I took a peek at the psionic book for 3.0, and found that the content was not Open Content. But, in the 3.0 SRD found online the psionic rules where there. So, how do you utilize that SRD? In the 3.5 SRD there are some parts missing, like the psionic attack and defense modes. How am I to use the first SRD then? I'm not very good at the legalistic parts. It's my understanding that I should be good just by putting in a reference to the SRD, copright so-and-so, in paragraph 15 of the OGL included with my clone text. Anyone have any feedback on that?
Posted by AndreasDavour at 11:14

I got my box of Jim's game today. Damn! This is one beautiful piece of work. Let me tell you that this is so good looking I feel sorry when I look at my S&W whitebox.

A more detailed report when I have had some time to digest all the goodies in this game.
Posted by AndreasDavour at 13:34

Free convention scenario for T&T
The Tomb of Dipsom Dints